Some images and video of the installation, November 27-29, 2019. Developed and exhibited at the CSIRO advanced manufacturing and materials precinct, Clayton, in collaboration with and supported by Michael Batten, Joseph Olorunyomi, Xavier Mulet and Deborah Lau. 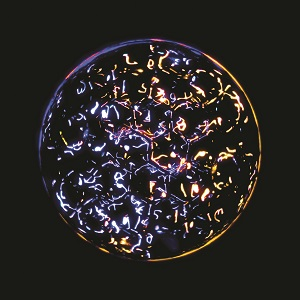 I am exhibiting my experiments in a unique in-situ installation at the CSIRO. Opening Wednesday 27th – Friday 29th November 2019.
Bookings essential – click here. 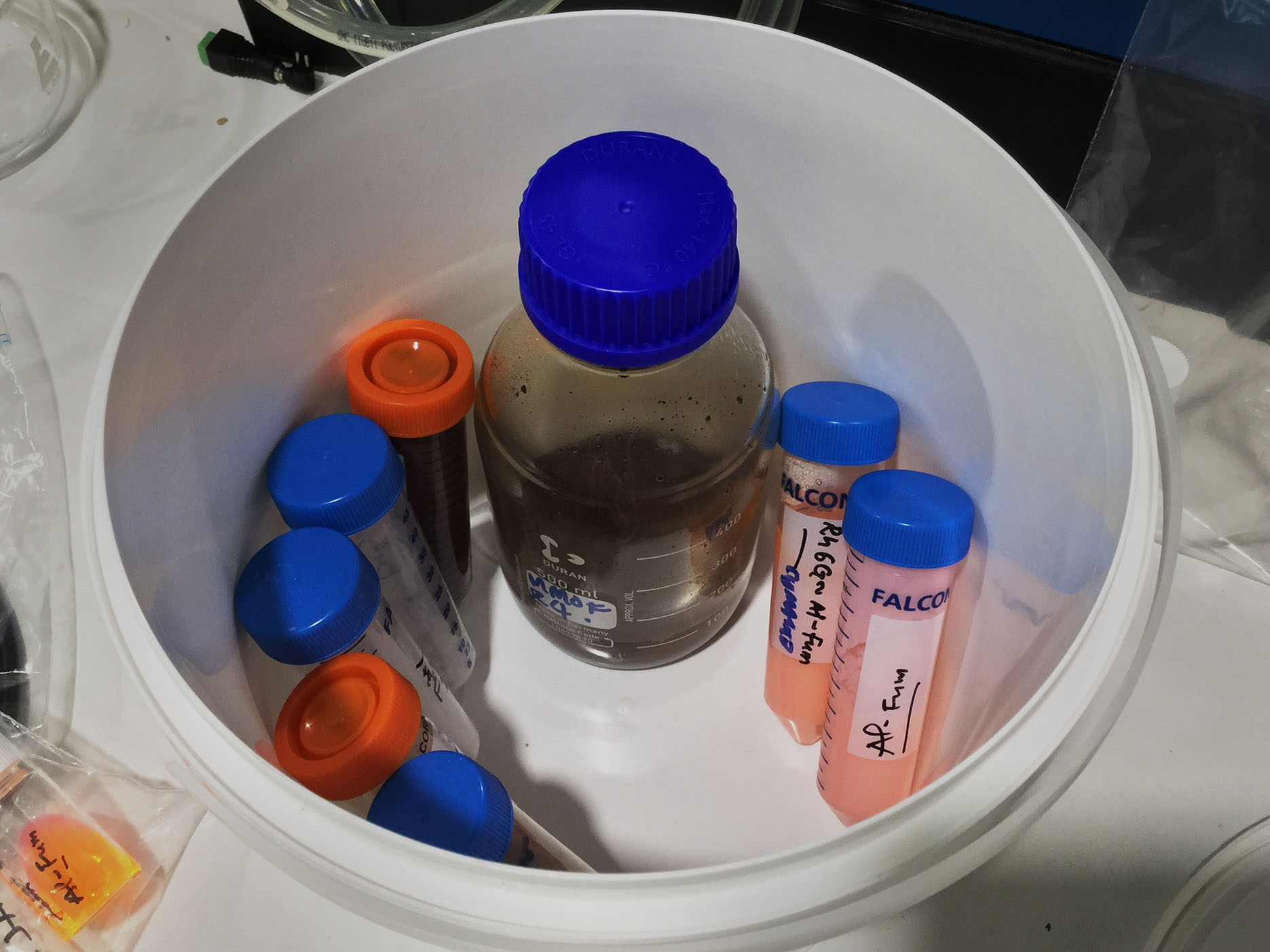 The material results of my experiments to date: a bucket of MOFs.

Through the processes of producing these chemicals, as described in the posts below, I have been chasing the essence of these materials, and I feel like I am back at the beginning, like a snake chasing its tail! I have synthesised perhaps unique chemicals and novel phenomena, but the goal of manifesting some kind of MOF essence is ever elusive – the actual reactions and chemical synthesis basically occurs on the molecular level and is completely imperceptible.

The unique qualities of the MOF molecules are manifested when other substances interact with them. The dynamic topologies of the MOF surfaces is perhaps the key to engaging with them, both materially and conceptually. In “matter matters“, Manuel Delanda describes such sites of material interaction: “the surface of any material object is the site at which one type of matter interfaces with another, and therefore the place where interfacial phenomena take place. (Because of this) exotic material behavior should occur … on all physical surfaces.”

On a level that is hopefully more than metaphor, collaborations such as mine are the interacting surfaces between the traditionally
distinct material practices of art and science. Yet a question has remained unanswered throughout my residency at the CSIRO – during these experiments, has there been a synthesis of art and science?

In a way that is somehow symbolic, across the room from my little experimental setup, the obscure vessel that arrived on the first day of my residency (see post) still hasn’t been able to be opened, and its chemical contents remain a mystery! 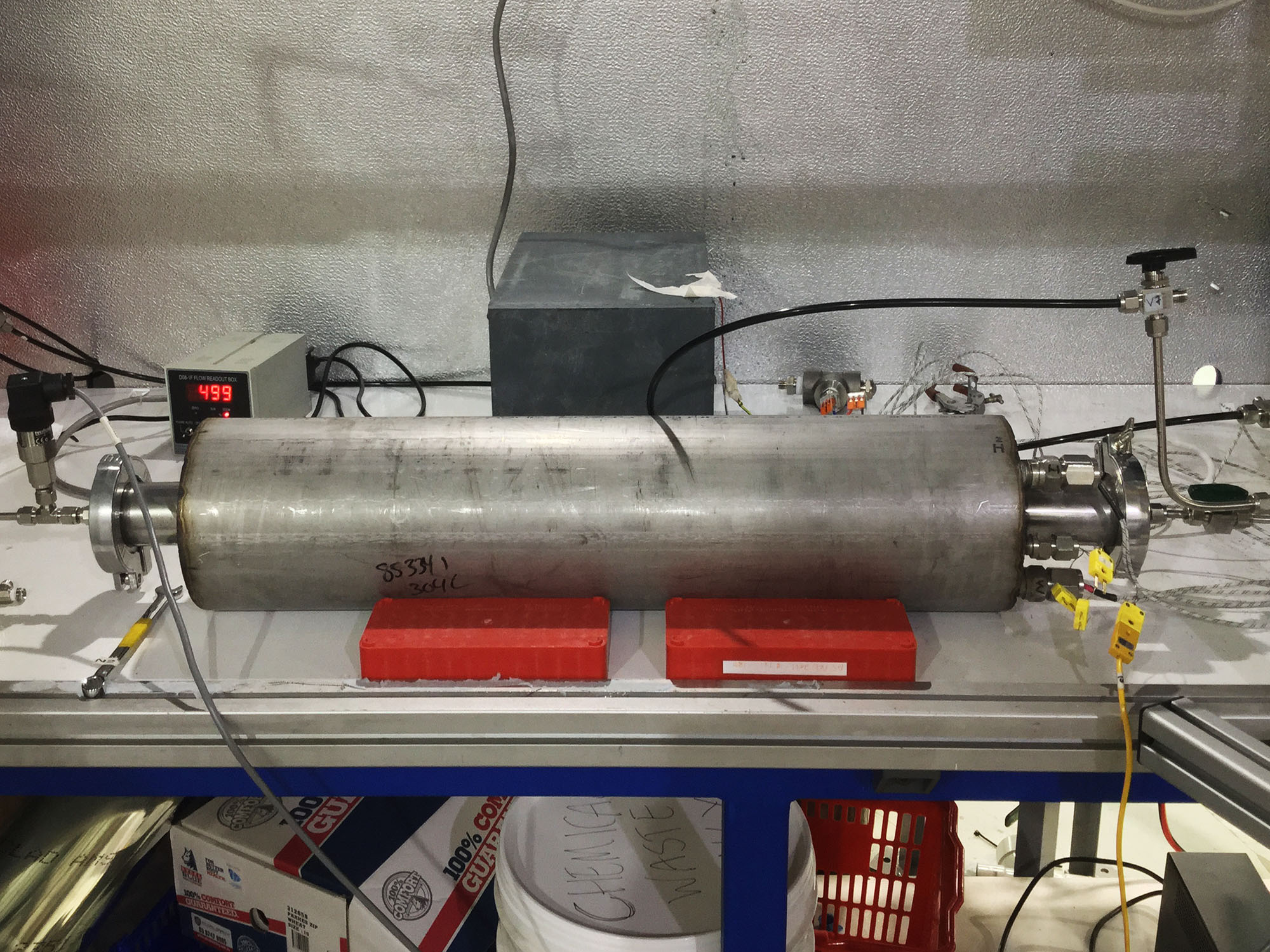 In 1603, in his search for the “Philosophers Stone”, a substance which can transmute earthly matter into pure gold, the Italian alchemist Vincenzo Casciarolo discovered the “Bolognian stone”. This emitted a blue glow in the dark after it had been exposed to sunlight. Also known as “Lapis Solaris”, (but now called barium sulfide), this was the first laboratory created phosphor. Galileo wondered about the unique phenomena of the Bolognian stone, asking “how it happens that the light is conceived into the stone”. Benzene, discovered by physicist Michael Faraday in 1825, is used widely in modern fluorescence and synthetic dyes. In 1862 German chemist Frederik Kekule had a revelation of the chemical structure of Benzene, impelled by a dream image he had of a serpent consuming it’s own tail in a halo of fire. This is the figure of the ouroboros, which is a key alchemical symbol.

As alchemical practices transmuted into modern chemistry, luminescence became used widely across experimental science and led to fields such as immunofluorescence in cellular biology. Yet I feel the essence of fluorescence is still somewhat mysterious – the mystery in its core is the mystery of the quantum realm, which is the ultimate source of this compelling phenomenon. Luminous matter reveals the alchemical interplay between energy and matter, in ways that still makes one ask “how light is conceived” into materials. Thus I am working with the scientists in combining MOFs with luminescence on the molecular level, in a way that imbues these unique materials with unique optical properties. Perhaps I’m adding a trace of “al” to contemporary “chemical” practices!

( (un)apologies to Horiba pty ltd for using the FluorEssence name ; )

MA03OP + RHD6G = another breakthrough! Successful synthesis of my Aluminium Fumarate MOF with a precise measure of fluorescent rhodamine, in a way that is not just mixing the two chemicals but binding them together on a molecular level, creating a new material that emits excited energy! Thanks to optical chemistry guru Joseph Olorunyomi for creating this perhaps unique form of energetic matter. And activating it in my cymatic frequency undulator apparatus produced quite novel energetic phenomena! Today is Mayday, the traditional celebration of anarchism in all it’s unfettered possibility! So it seems fitting to bring into play my favourite method of doing science, based upon the radical empirical principle of Dadaist physicist and anarchist philosopher Paul Feyerabend: “Anything goes”

Meanwhile, my other experiment with megasonics did amazingly actually work! Once I got that bloody metal disk we sonicated the F out of the Manganese MOF and, as it works on the atomic scale, we couldn’t see shit happening, but this morning the MOF had separated, therefore, as my scientist colleague said, the experiment was actually working! Third time lucky bucket!! (postscript – i later found, using my induction coil to test it’s EM field, that it doesn’t actually work at all!)

Thus I am mixing cornflour with ferromagnetic nanoparticles to “synthesize” the hard to get Manganese MOF 74, while I pester the overtly OH&S obsessed keeper of this virile yet toxic material to get my (protected) hands on the real stuff. Using a sensitive induction coil to pick up electroacoustic vibrations in the liquid creates some kind of non-Newtonian-ferric-fluidic-electromagnetic-audio-visual feedback loop, done in a way that is delightfully anarchistic and almost, but not quite, completely unscientific!

An accumulation of apparatuses is manifesting in my studio space / laboratory.. almost ready to put these elements together for a high / low frequency / voltage audio / visual experiment!

In themselves these artefacts appear to emit a kind of tension / frustration / excitement.. and I must wait yet another week to conduct the experiment. As the MOF project director says, “doing science can be a slow process!”

Meanwhile I have been trying to extract my own light-emitting chemicals in my backyard lab… Cinchona calisaya is a herb which contains the fluorescent chemical quinine. Grinding it up and cooking it down produced a sickly smelling paste that glows under UV light and keeps the malaria at bay. Cheers to DIY! Whilst I wait for a metal disc to make the megasonic experiment work, I’ve gone back to the library, and there’s some great precursors to this kind of chemical programming…

Perhaps the first liquid computer was the “Water Integrator”, a soviet behemoth created 1936 by Vladimir Lukyanov, which was soon followed by the MONIAC (Monetary National Income Analogue Computer), a liquid computer system created in 1949 by the New Zealand economist Bill Phillips. The name itself is a kind of play on the early computers ENIAC and MANIAC (which disturbingly was named after it’s use as a simulator for nuclear bomb detonations). MONIAC was used to simulate the British economy (which seems to have recently sprung a leak), and one was possibly used to control the economy of Guatemala! Is this where the term “financial fluidity” originates?

In an inversion of the computer-aided chemical design undertaken here, rogue scientist Lee Cronin is working in a realm of research called “inorganic biology”, which sounds a bit like the bio-horror movies of David Cronenberg. Cronin believes that creating true artificial intelligence is impossible just using silicone wafers (i.e. digital computers), so he’s trying to do it with chemicals that can interact in ways that approach the molecular complexities of a human brain. Watchout!